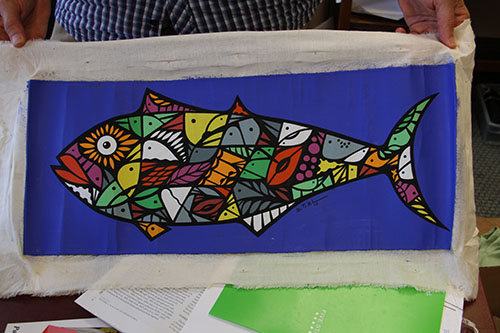 “This is a piece of artwork I got in Cuba,” Becker says. “On the inside of the fish, you can see the birds that make it up.”

Have you ever wondered what kind of people your professors are outside of their teacher personas? Maybe one of them has an obsession with Willy Wonka or special chalk imported from Japan. You never know what kind of oddities professors might keep in their offices – which is why I went to find out. 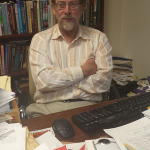 Greg Alles of the Religious Studies Department at his desk 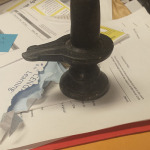 A small Shiva Lingam that he uses in his Hinduism class. “It’s the standard image you use when you worship the god Shiva,” he says. “It’s supposed to symbolize the cosmic generative power of the god Shiva. You pour liquids on it, and the liquids then fall into the container and run out there.” 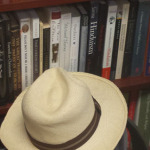 A collection of Alles’s books and his signature hat. 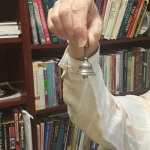 A puja bell. “You use this in worshipping God in Hinduism,” he explains. 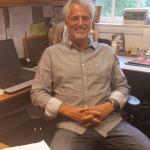 Robert Kachur of the English Department at his desk. “I was pleased when I got your request,” he says, “because my office is very important to me.” 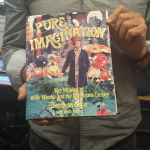 “Anyone who knows me well knows that my philosophy is that there are two texts that tell all truths, and one is Willy Wonka and the Chocolate Factory.” The other is the Matrix. 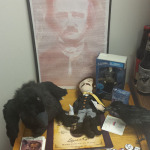 “And that’s my Poe shrine!” 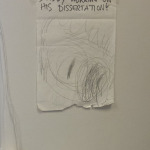 “When I was in grad school, [my daughters] used to make me pictures… When my oldest daughter was only two years old, she drew that… That’s the text, and that’s my eye, so I titled it ‘Daddy Working on His Dissertation.’” 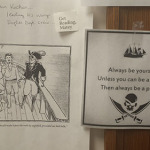 “You will notice a pirate theme if you look carefully,” Kachur jokes, as his office is full of pirate memorabilia. “The funny thing is that I’m not *really* into pirates, but I have become known as ‘Captain Kachur’ in the English department since I’m the chair. Instead of ‘chair,’ I’m ‘captain.’” 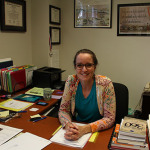 Amy McNichols of the Foreign Language Department at her desk. 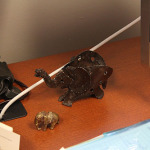 “The thing that I think is cool about elephants, symbolically, is that… Ganesh is the remover of obstacles, in yoga terms, and I think that’s kind of cool,” she says, referencing an elephant-headed Hindu god. “And I think that it’s always good to be reminded that obstacles can be removed.” 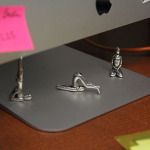 Yoga figurines that McNichols received as a gift, since she is a yoga instructor. “Even when I’m not able to practice regularly, they remind me of my practice, and my yoga practice made my life infinitely better, because yoga is very good for you physically and mentally.” 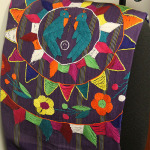 “A friend gave it to a friend of mine. It’s from Guatamala.” “What is it supposed to be?” “I have absolutely no idea.” 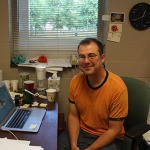 Spencer Hamblen of the Math Department at his desk. 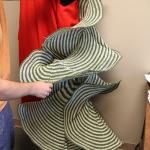 A crocheted Lorenz manifold that his sister-in-law made for him. It is the “object that made people start studying chaos theory,” describes Hamblen. “This guy Lorenz was trying to model the weather and he had this equation with a bunch of variables, and he got this solution which behaved really weirdly. If you’re anywhere on this thing, it looks completely flat, but it starts to not be flat when you make it bigger. It turns out that it works really well for crocheting. There’s this great connection between geometry and crocheting.” 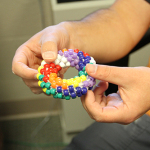 “So there’s a famous math theorem that says that if you have any map of countries, you can color it in using only four colors, such that no two countries that are the same color touch one another,” explains Hamblen. “This is the proof that you need seven colors if you have a donut.” 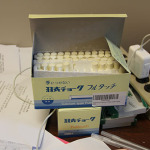 “The place where we get chalk changed their recipe and the new chalk they made was terrible. So I went online and tried to find the best chalk possible… The Amazon reviews for this chalk were hysterical. The best review I heard of it was that ‘it’s like a Lamborghini for your hands’… so I bought a whole bunch of it.” 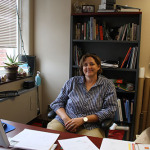 Mona Becker of the Environmental Studies Department at her desk. 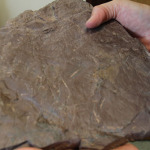 The “coolest thing” in Becker’s office. “This is a dinosaur footprint,” she says. “I don’t know if you can see the three toes, but there’s a dinosaur footprint that’s imprinted in that piece of sandstone. I got it when I was an undergraduate… The dinosaur lived in the Triassic Period, about a hundred-and-ninety-five-million years ago.” 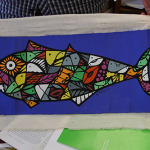 “This is a piece of artwork I got in Cuba,” Becker says. “On the inside of the fish, you can see the birds that make it up.” 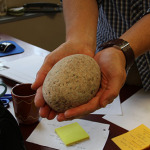 A rock from Great Duck Island off the coast of Maine. “I used to spend summers up there at a biological station when I was younger,” Becker explains. 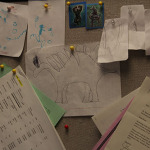 A dinosaur picture that her friend’s child drew for her.